Bath, Maine, situated on the Kennebec River, protected from stormy seas and with a gradually sloping shoreline throughout most of its length, is geographically ideally suited for shipbuilding. Add to this, in the early days of vessel construction there, the abundance of wood for frames, planking, cabins, and masts; one can see why Bath became one of the foremost shipbuilding sites in the world.

It all began in 1607 at nearby Popham Beach, when a courageous band of Englishmen, having settled there for one winter, built an ocean-going pinnace, named Virginia for the virgin Queen Elizabeth. Beginning a few years later, there were several other vessels launched in the area with hiatuses due to the Colonial Wars with France and the Native Americans. 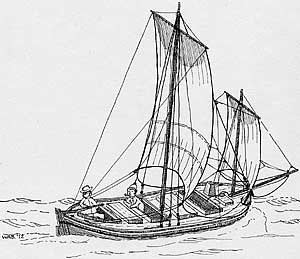 Shipbuilding in Bath became continuous from the 1740’s on, primarily sloops, schooners, and brigs, used by local entrepreneurs to carry regionally produced products such as lumber, bricks, hay, and salted and fresh produce to the coastal centers of the colonies to the south as well as to the West Indies. These vessels returned with items which could not be produced locally, such as molasses, rum, sugar, and dyes from the West Indies and British or colony manufactured goods from the cities to the south.

After the revolution, more substantial ships were built, both for ship owners in other U.S. seaports, as well as for local men developing fleets to trade with Europe and cotton ports to the south. Bath also still figured strongly in the earlier coastal U.S. and West Indies trades.

Many setbacks occurred affecting not only Bath merchants but U.S. shipping generally, such as Caribbean and Mediterranean pirates, embargos, wars, and depressions. But by the 1840’s, Bath was in the ascendancy with several locally built, owned and managed square-rigged fleets developing and 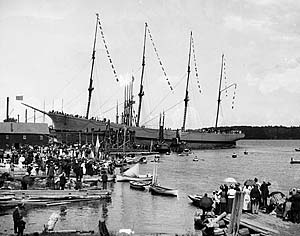 returning large profits to Bath, resulted in considerable fortunes, such as those of the Pattens, McLellans, Sewalls, Crookers, and Houghtons. This was the period when many of Bath’s beautiful ship owner’s mansions and Greek revival workers’ homes were constructed.

With the discovery of gold in California, there was a demand for speed in vessels carrying passengers and much needed cargos to the prospectors there. Bath participated in this short-lived decade-long boom. They produced a few true clippers and reached a peak in the number of shipyards building vessels along the Bath shore at the same time, 22 in all.  They also continued to build primarily profitable cargo carriers, moving larger cargos, but at a somewhat slower speed.

Many locally-owned vessels were captured or “sold foreign” during the Civil War in the 1860’s when Confederate steam-powered raiders threatened northern shipping, greatly reducing shipbuilding temporarily.

After the war, Maine built more than half of the ocean-going wooden sailing 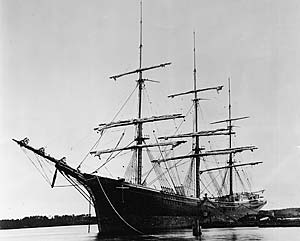 vessels in the United States, and the Bath area built more than half of those. Most notable of these were the Downeasters, a compromise between the speed of clippers and the cargo-carrying capacity of the old bluff-bowed cotton-carrying vessels. Downeasters were built in Massachusetts and Maine almost exclusively, and Bath was the capital of this endeavor. Henry B. Hyde, launched in Bath by John McDonald in 1884, was the ultimate. The Sewalls and the Houghtons were still building outstanding ships for their own fleets, but the firms of Goss and Sawyer, Adams and Hitchcock, William Rogers and others turned out even more vessels, primarily for non-local owners. These large cargo-carrying vessels rarely came back to Bath but ran between major seaports of the world making money for the owners.

During this same period, the size and efficiency of fore-and-aft rigged schooners was appreciating. The first four-mast schooner on the East Coast was built in Bath in 1880, the largest ever five-mast schooner was launched there in the 1890’s, and the largest wooden sailing vessel ever built in the 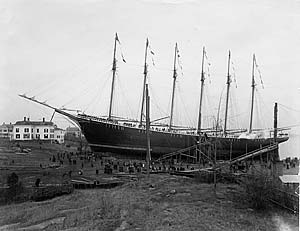 United States, the six-mast schooner Wyoming, was launched from Bath’s Percy and Small Shipyard in 1909. G.G. Deering, Kelly, Spear and Company, Nathaniel T. Palmer and William T. Donnell were the other major shipyards during this twilight of wooden sailing ships. By 1921, wooden shipbuilding was dead, having lost out to steel steamships.

During the ascendancy of the schooner, Arthur Sewall and Company built the country’s only fleet of steel sailing vessels. And the Bath Iron Works was formed by the former ship machinery specialist, Thomas W. Hyde, and began to build steel naval vessels, yachts, and passenger ships.

After World War I, only BIW survived as a major shipbuilder in Bath. It, too, faltered in the late 1920’s, but was soon reborn thanks to William S. Newell and earned a reputation for building the best steel vessels for the next 80 years. 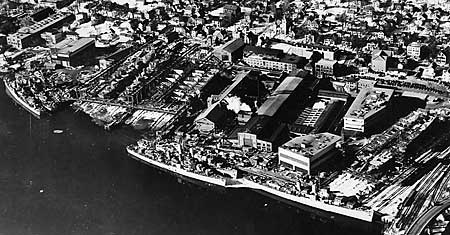 Worth noting, is the remarkable record of shipbuilding at Bath Iron Works during World War II:  they launched a destroyer every 17 days and more destroyers during the war years than the entire output of all of the Japanese Shipyards.  Today BIW is still building warships for the US Navy in a thoroughly modern shipyard.

Images provided with permission by Maine Maritime Museum, be sure to make them part of your visit to Bath.