History of the Paul Revere Bell 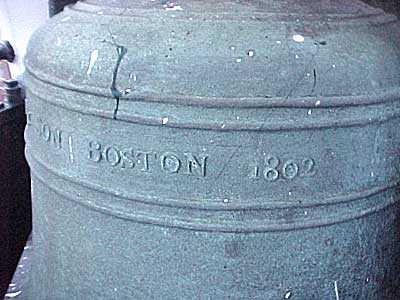 The bell was cast by Paul Revere & Son in Boston in 1802. A subscription was taken up in May, 1803 “for the purpose of purchasing a bell for the new meeting-house in the town of Bath.” Parker McCobb Reed’s History of Bath Maine lists forty-seven pledges, ranging in amount from $2 to $50, and totaling $491. The new meeting house subsequently known as the North Church, was built in 1802 at the northeast corner of High and Centre Streets, and replaced the original meeting-house on Witch Spring Hill. The bell was brought to Bath and was hung in the spire of North Church in 1803, and for many years was rung as the Town Bell.

After the congregation of Old North built the Winter Street Church on Washington Street in 1843 and moved there, the bell was sold to the Universalist Church and hung in the steeple of its church on Front Street. In 1860, the Universalists moved to a building on Washington Street at the head of Linden Street. The church on Front Street was torn down and replaced by the Church Block, which still stands with Mason Street Mercantile and Bath Printing Company occupying its ground floor.

The City purchased the bell and moved it to the old Town Hall which was located on the northeast corner of Centre and Water Streets. (The former W.T. Grant store is located on the site, and is now occupied by Tate’s.) The Town Hall was built in 1837-38, was remodeled around the time that Bath was chartered as a city in 1847 and was renamed City Hall, and the belfry was added in 1861 to accommodate the Revere bell.
When the Davenport Memorial City Hall was built in 1929, the bell was moved to its belfry. Also moved to the new City Hall was a tablet commemorating the bell, which had been placed in the old City Hall in 1915 by the local chapter of the Daughter’s of the American Revolution. Unfortunately, as the Bath Daily Times of May 29, 1929, reported, “Although the tablet says the bell was cast in 1805, those who have examined it say that the imprint on the bell shows it was cast in 1802.”

While Paul Revere is probably best known for his famous Midnight Ride and for his silversmithing, after the Revolution he had set up a foundry in the North End of Boston, making iron and later brass items such as stoves, hearths, anvils and cannons. In 1792, he agreed to re-cast the cracked bell from what is now known as the Old North Church in Boston, and from this beginning, the Revere foundry went on to cast a total of 398 bells between 1792 and 1828, first in the North End and, after 1804, in Canton, Massachusetts.

Perleston L. (“Bub”) Pert, formerly of Bath, has researched the Revere bells in Maine, and in 1971 was able to identify twenty-three still remaining in the state.

Of these, only four could have been cast personally by Paul Revere before his death in 1818: the bells at Bath City Hall, Christ Church at Gardiner, First Parish Unitarian Church at Kennebunk, and St. Patrick’s Roman Catholic Church at Damariscotta Mills.

In 1936, Henry W. Owen wrote in his History of Bath, “For more than a century (the bell) was rung daily morning, noon and evening, at stated hours, besides announcing hours of religious services and alarms of fire, tolling for departed citizens, and pealing in honor of independence days and other occasions of joy. On account of its age it has been retired from regular duty, but still on special occasions is sparingly used.”

Every New Year’s Eve at Noon the community of Bath surounds its City Hall to sing Auld Land Syne of Bath and ring its historical Paul Revere Bell.

Main Street Bath is a non-profit organization working to maintain and strengthen a thriving community that lives its sense of history, is culturally active and encourages’ community spirit and the involvement of its citizens.

If your New Year’s Resolution is to invest more in your community, VOLUNTEER with Main Street Bath. We have four standing and active committees including Design, Organization, Promotions and Economic Restructuring, and the Annual Bath Heritage Days festival held on Independence Day weekend.

For more information or to volunteer please call us: The Main Street Bath Director (207) 442-7291